Can a good player go bad? 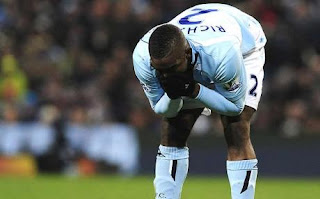 After a very impressive start to the season, the recent three game winless run (although undefeated) has brought one or two frustrations from fans to the fore.

None moreso than the continued form of Micah Richards.

As rapid as his ascent was, coming into the side as a teenager and marking a first team spot as his own before catapulting himself into the international fold, his subsequent decline has been anything but.

After forging a solid looking partnership with Richard Dunne during the early days of Sven-Goran Eriksson in 2007/08, both he and Dunne suffered a dip in form over the remainder of that season. Such was Richards drop off that eventually he was moved back to his original position of right-back during 2008/09 as he struggled to recapture the precocious form of his early days.

Whilst he has shown some promising signs this season, he has yet to truly convince and lost his place in the side to Pablo Zabaleta - not before time in many fans opinion.

Amazingly, there is still talk of him forcing his way into the England reckoning for the 2010 World Cup, but this is at best fanciful thinking. Fabio Capello - who is a shrewd (and very good) judge of a player, clearly does not rate Richards and he hasn't been anywhere near the senior side since the Italian took over from Steve McLaren.

An often remarked view that I get emails about is that Richards has simply 'lost it' - that somehow what propelled him to the heights he reached has deserted him, a lack of mojo and leaving him a redundant shell of the player he once was.

But is this the case? Can a good player simply become bad, or is that too simplistic a viewpoint?

My own thoughts on Richards are that he was never really a 'true' footballer, by that he doesn't have the technique or 'smarts' (concentration, positional awareness) that the top level defenders have.

He possesses amazing physical traits of course (which better suits him to a central role) and a great deal of pace, both of which may well have glossed over his frailties during his career. He is strong in the tackle and capable of bringing the ball out of defence.

Concentration appears to be big issue for him though. There has been more than one goal this season where Richards has been out of position, something you simply cannot afford at this level.

You cannot write a player off of course, and it would be foolish to do so with him - particularly with someone who has the ability and potential Richards has. Lest we forget he is only 21 years of age. But the financial restrictions at the club that helped initially propel him into the starting line up are no longer a constraint, which means that Mark Hughes can afford to be less patient and more ruthless.

Having served his suspension, I expect Pablo Zabaleta to slot back in at right-back and although Richards may replace the injured Toure tomorrow evening (personally I would like to see Vincent Kompany), Richards will likely enough find himself back on the outside looking in, and with a great deal of work required to force himself back into the line-up and to the heights he reached when he first burst onto the scene.

Richards should not have been playing in the second half against Fulham. However, he did "score" in the first period, only for it to be cancelled out due to another dimwit, costly foul by, grossly overrated,Barry.

Surely you'd imagine that if Richards wasnt a true footballer, relying on physical attributes, he'd be less prone to this 'bad patch', as those attributes would continue hiding the positional flaws more often than they do. Unless he was just exceedingly lucky to always be stood in the right place for the first 2 years, all I can put it down to is he now just doesnt care enought to put in those hard yards in on the pitch anymore.

ps: Barry has been fantastic this season, and the decision to penalise him was a pathetic call.